So while I was browsing online a few weeks ago, I ran into the cutest image. It was a girl about 4 or five years old wearing a crocheted rainbow hat. She looked so damned cute and instantly I wanted to make one for my three-year-old boy Roman.

So I rushed on over to Etsy.com and searched for rainbow-colored hats, and to my surprise, two patterns popped up. The first one was the tutti-frutti rainbow crochet hat pattern and the second was the crochet swirl hat pattern. I think you already know what I did. I just had to make them both for him. It Was so difficult I just couldn’t choose one over the other because they were just so stunning.

And so I have decided that I will tell you about them both, and maybe you can choose the one you want, but I highly suspect you will end up making them both just like me. So we will start with the tutti-frutti crochet rainbow hat pattern.

Just as the name suggests, this hat is a bit playful with frilly parts sticking out of the top like a bunch of bananas. But don’t let that cloud your judgment the tutti-frutti hat is beautiful. With its rainbow colors, it will look dashing on anyone, and it actually doesn’t require a lot of materials to make. 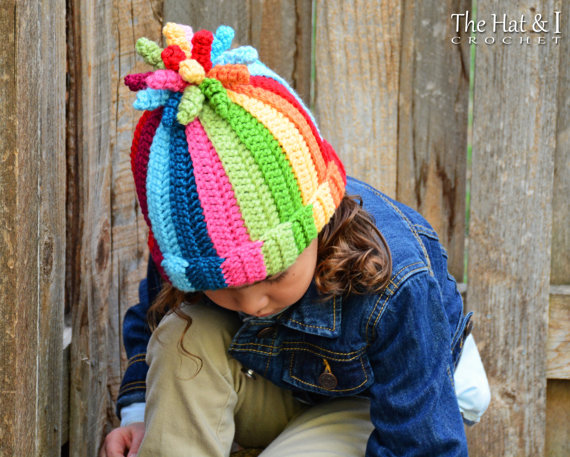 The tutorials and PDF for making the tutti-frutti crochet rainbow hat pattern are very detailed and explained in easy to understand simple English. Now although the pattern is rated for the more intermediate crocheter the tutorials directions make up for that.

They are rich in illustrations and pictures which will guide you every step of the way. So even if you are a beginner after a few tries, you will get the hang of the pattern. I happened to knock out this hat in a day, and in my experience, I found that it was quite easy to make.

And the pattern doesn’t limit you to just what is in the instructions. You can try adding your own personal touches to it to spice it up. You can incorporate other designs or change up the colors.

It doesn’t just have to be a rainbow you can use other color combinations that will also look very beautiful.

For crochet beginners, if you stick to the given instructions you will end up with the most beautiful tutti frutti crochet rainbow hat.

So next we have the crochet swirl hat pattern and also as the name suggests this hats main feature is its twist top topped off by a bunny tail style top. The pattern produces a very stunning hat that will look cute on anyone.

My son adores this one, and it looks so good on him. And just like the tutti-frutti crochet rainbow hat pattern the crochet swirl hat does not require a lot of materials.

Detailed PDF And Tutorial With Images

Also, like the tutti-frutti crochet rainbow hat the crochet swirl hat pattern has quite extensive and detailed tutorials and PDF. The instructions are given in easy to understand and simple English with explanations for the more technical crocheting terms.

The PDF also includes a lot of diagrams and pictures that explain every part of making the twist top crochet rainbow hat. This pattern is also considered for the more advanced crocheter, but since the instructions were so detailed, I believe that even a beginner can make the hat.

If you follow the instructions to the letter, then you will end up with a gorgeous twist top crochet rainbow hat. I knocked out this hat in a day also; the pattern was quite easy to follow.

I think the only part that a beginner may have difficulty with is how to make the pom pom for the hat top. Other than that the whole pattern was very straightforward. 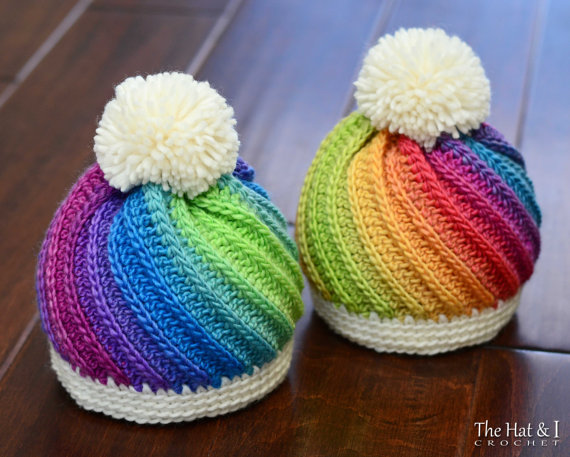 The crochet swirl hat pattern doesn’t limit you also, and you can add your personal touch to it to make it just right. Especially the colors, you can play around with them to produce different types of crochet swirl hats to fit your fancy.

So now that you know how both are made what things do they have in common? Well, both the tutti frutti crochet rainbow hat and the swirl crochet hat patterns come in different sizes. So no one gets to miss out on these amazing hats.

The main sizes that each pattern comes in include:

Since they are crochet rainbow hat patterns, they are stretchable, so they fit quite snuggly with anyone. So not only are they just so cute, but they will also keep you warm and toasty.

If you want to stand out in a crowd, then the crochet rainbow hat pattern is the thing for you. They are just too beautiful to ignore, and in turn, people won’t be able to ignore you too.

So to conclude, the crochet rainbow hat pattern is one you didn’t know you needed until now. They are fun to make, they look good, and they keep the cold from nipping at you. So whether you want to give them as gifts to family and friends or for your son or even for yourself the tutti frutti crochet rainbow hat and the swirl crochet hat patterns are just right.

You can even make one for you man and won’t he look just stunning. So go on Etsy.com and get yourself either one of the crochet rainbow hat patterns or better yet just get them both.